An outboard motor fairing to prevent propeller ventilation
Attaching an outboard motor to almost any type of double ended hull generally involves using a bracket mounted on the side of the hull.  Some small catamarans also have their outboards mounted to a bracket between the hulls. Without a transom or deep fairing in front of the leg of the motor, severe ventilation of the propeller can occur and reduce the thrust of the motor.  Ventilation (where air is sucked down into the propeller) occurs because of the turbulence behind the leg of the outboard motor.
The two horsepower motors are the worst offenders, with an almost round leg between the power head and the anti-ventilation plate.  Larger engines have a more streamlined leg shape and don’t have as much of a problem as the two horsepower size.  Unfortunately for me, the outrigger canoes and proas that I build don’t need any more than two horsepower, so a solution was needed.  The new Honda two horsepower motor, that I had recently purchased, ventilated horribly at any speed more than an idle, and threw large amounts of spray into the aft section of the canoe.

I decided to fabricate a fairing around the leg of the motor to reduce the turbulence and hopefully increase the thrust.  I considered many possible methods and materials, and I didn’t want something that would be too difficult to remove if it didn’t work as I expected.  Flat panels of fiberglass bent around the leg in a foil shape seemed to be the easiest solution.  Sheet metal could also do the job, but my workshop was better equipped to make it out of fiberglass.

I fabricated a flat panel of fiberglass, using a sheet of window glass for a mold.  I applied a coat of mold release, allowed it to dry, and brushed on some gray polyester gelcoat.  After the gelcoat had set up, I saturated a scrap piece of 18 ounce biaxial fibreglass fabric with vinylester resin on top of the gelcoat.  Three or four layers of 6 ounce woven cloth could also be used.  The next day, I peeled the fibreglass panel off of the sheet of window glass. 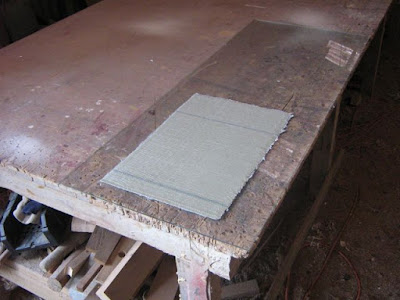 I used a jigsaw with a carbide grit blade to cut two identical rectangles from the panel. The two rectangles were taped together along the future leading edge, and opened in a vee shape held at a 70 degree angle by a couple of foam wedges.  A small fillet of vinylester  resin and glue powder was applied along the inside of the joint, followed by two strips of six ounce fibreglass cloth. 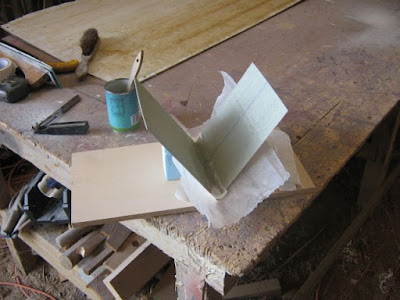 The next day I tested the fit by bending the vee panel around the leg of the motor, with the bottom edge of the panels resting on the top of the anti-ventilation plate.  I was pleased with the curved shape and decided to go ahead with bonding it to the leg.  I applied packaging tape along one trailing edge of the panel with the tape overhanging to allow it to hold the two panels together when bent around the leg.  I applied a bead of silicone sealant down each side of the leg, and a generous bead of resin/glue powder mixture along the inside of one trailing edge.  I folded the panel around the leg, and wrapped the tape over the trailing edge.  So far so good and it didn’t spring loose and fly across the shop. 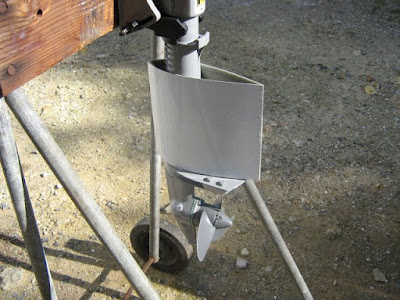 The next day I couldn’t wait any longer to test it, so I clamped it to my Ulua outrigger canoe, loaded up some fishing tackle, and headed out across the harbor.  It performed beyond my expectations, with no ventilation occurring at any speed.  Normally with side mounted installations, a hard abrupt turn can also cause some ventilation and over revving, but this little problem was cured too.  At this stage the foil had no top panel, and a thin sheet of water was peeling off the top edge.  An over-size top panel or fence would deflect the water outwards and also stiffen the whole foil installation.  I laminated another flat fibreglass panel at twice the previous thickness, cut it about 5/8” larger all around the foil, and bonded it (in two pieces) to the top of the foil with a resin/glue powder fillet.
It’s important to be able to rinse out any salt water from the inside of the foil to avoid any corrosion of the leg, so I drilled two holes in the top panel.  The two bottom corners of the foil already had small openings for drainage where they overhang the anti-ventilation plate. 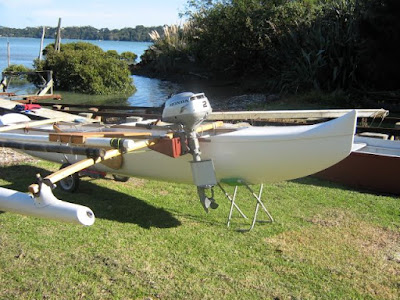 I choose the Honda engine because it’s a four stroke, it’s air cooled, and it has a centrifugal clutch, but the clutch can cause a small problem when approaching the shore or a dock.  If you use the motor to steer (rather than a rudder), reducing the throttle to slow stops the propeller turning, and you lose steering control.  An unexpected benefit of the large foil around the leg is that it functions as a rudder after the propeller has stopped.
If I ever have to remove the lower unit from the motor, I’ll have to cut a small hole in the fairing to access one of the bolts, but since that shouldn’t happen very often (no water pump!), a simple patch job will restore it to its former shape.
Ideally this fairing could be made of some high density foam in two halves, so that it could all be removed with a couple of screws.  There is exhaust flowing in the leg though, so maybe having cool water around it is best.
Since this was written I have installed the same type of foil on two Yamaha 2HP motors with great success. 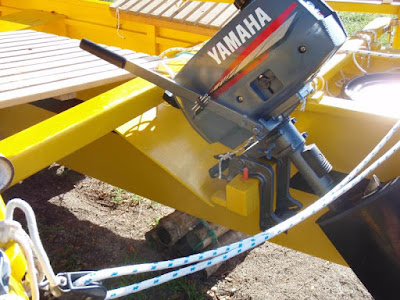